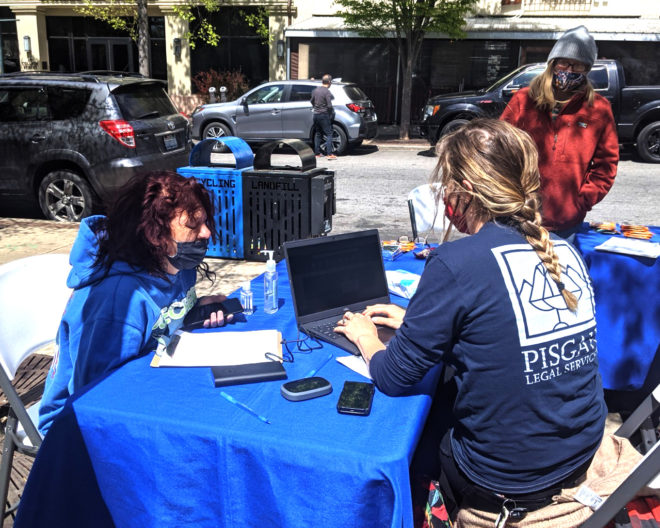 Pisgah Legal VITA Program coordinator, Emily Ermer (R), helps Angie prepare her taxes so she can access unclaimed stimulus payments at an outreach event in Pritchard park, downtown Asheville. This event was one of many in partnership with local nonprofit Beloved Asheville.

This scene was one of many replicated throughout the past months, as Beloved Asheville and Pisgah Legal partnered in multiple outreach events to reach members of the homeless and recently sheltered populations.

“It is really important for people to file their taxes- especially those who haven’t filed in years because of no income or low incomes,” said Emily.

“Usually, when people think about taxes, they either dread them or don’t get too excited about them,” Emily continues. “This year is different. There’s thousands of dollars that can be claimed in stimulus payments and tax credits- money that can be used as a security deposit for a place to live or a car repair to get to work. It can have a dramatic affect on your life. But if the IRS doesn’t have your correct information, it goes unclaimed.”

It was at one of these outreach events in Pritchard Park, a popular destination for members of the homeless population, that we met Angie. After years of experiencing periodic homelessness, she had not filed her taxes in years due to no income. since she had filed her taxes. It just didn’t seem important. She had not received any stimulus payments beginning March 2020, and found out from Beloved Asheville that Pisgah Legal was providing free tax assistance in the park.  In less than an hour, her forms were completed and she was told to expect a check for $1,800 in stimulus payments.

“Partnerships like these (between Pisgah Legal and Beloved Asheville) are so important for making sure our friends on the street have the same access to their stimulus payments as everyone,” says the Rev. Amy Cantrell. “For our friends on the street, the biggest barrier is often access. Having someone with a computer who knows all the ins-and-outs of the tax system is vital.”

“Ya’ll are a blessing,” said Angie. “I wouldn’t have done this on my own. I didn’t know how.”  She was excited about moving into a new subsidized apartment. “I’m going to use the stimulus money to buy household things, so it feels like a home.”