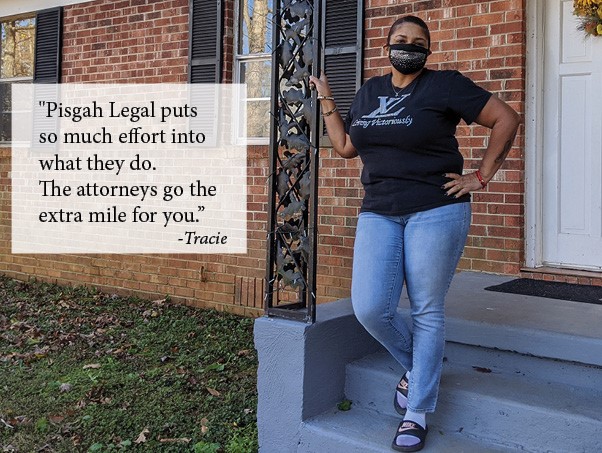 Tracie opens the door to her new home wearing a smile that shines through her rhinestone embedded mask.

Tracie, a proud mother of two adult children and a fifteen-year-old son, makes everyone she meets feel like an old friend. Last winter, Tracie  moved into an apartment that needed serious repairs, but had faith that the landlord would keep his promise to fix them. Six months later, COVID-19 hit and she had to leave her job for health reasons. She was diligent about keeping up with the rent, even though the landlord still had not made repairs.

Soon she started feeling sick and her son had trouble getting out of bed. That’s when she noticed black mold forming in the vents and along the wall. She contacted the landlord and told him about the mold, as well as to let him know that her new job working from home was delaying her first paycheck. The next day she received a text that she had to move out in three weeks. “I knew this was not legal. But most people don’t know their rights. When the landlord says to move, they move.”

She contacted Pisgah Legal and was connected to staff attorney KaDeidra Baker.  As Tracie’s attorney, KaDeidra used the power of the law to have the eviction dismissed, secure Tracie’s deposit and received a settlement for back rent because of the unsafe housing conditions caused by the mold. With that in place, Tracie now had the means to move into a new home.

Tracie is now living in a new place that is safe, healthy and affordable. “I feel so blessed. This is not just a place to rent. This is a place to live.”  She hopes to one day purchase a home-hopefully the one she’s living in now. “I have a great relationship with my new landlord. He’s doing everything he can to make this place a home for me and my son.”

When asked if she feels like she would have had the same outcome without assistance from Pisgah Legal, she shakes her head. “When you walk into a courtroom with Pisgah Legal, it makes a difference. The judge and other attorneys pay attention.”

“Pisgah Legal puts so much effort into what they do. The attorneys go the extra mile for you. KaDeidra could have stopped at getting the eviction dismissed, but she kept going and got a settlement so I could move into a new home. They really stand up for you.”