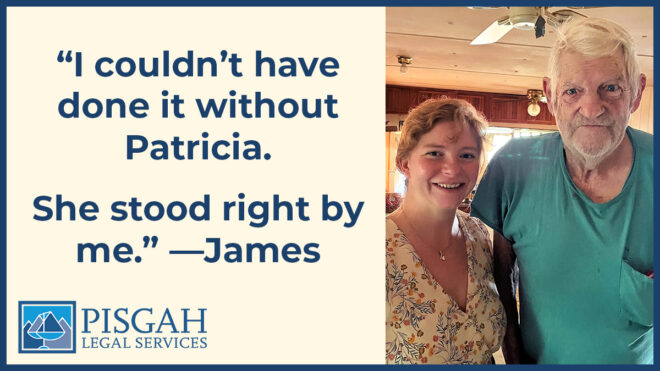 When Pisgah Legal attorney Patricia Caddell met James, it was clear he wasn’t being given a fair chance.

A disabled Veteran, James is hard of hearing – nearly deaf. When his landlord tried to evict him last year, James struggled to understand why, or what was going on. He often thought others were mocking him, especially in court.

Patricia was dismayed to discover the court had no assisted hearing devices. She worked with the county to arrange one for him and through the court proceedings that he was now able to understand, James and Patricia showed that he did not violate the terms of his lease. The eviction was dismissed.

In many ways, it was a major win. James got to stay housed in the place he’d been living in independently for more than five years and he got to keep his closest companion, his little dog named Jack.

But there’s more to the story. James’ eviction was dismissed at the same time his son was released from prison, and the two have a rocky history.

Fortunately, James found not only an attorney in Patricia but also a dedicated advocate.

When James’s son was released from prison, James thought they would be able to turn over a new leaf. His son moved in with him but sadly, James’ son became physically and emotionally abusive towards him. James felt isolated and unsafe in his own home because he could not call 911 due to poor cell phone service and his son even stole his car.

Patricia had a sense that James would need more support after his eviction case. She says, “I knew if I closed his case, he wouldn’t be okay.” One evening, Patricia received a call from the county magistrate saying he had James and James’ dog, Jack. Patricia learned that James’ son had assaulted him. She filed a restraining order right away.

Even after that, the situation continued to escalate until one morning when Patricia received a disturbing voicemail from James’s phone – his son was clearly threatening his life. She called 911 immediately.

Thankfully, James was safe. He decided to press criminal charges and now his son is back behind bars. He feels safe in his home and is thankful for Patricia’s dedication and responsiveness.

It would have been a natural next step for Patricia to close James’ case. After all, she’d helped him stay housed and get a protective order.

But James was still struggling. There were resources he desperately needed. He needed new hearing aids and actual meals – he’d been living on a dwindling supply of nutritional shakes.

Patricia called and emailed people across the state who might be able to help James or put her in contact with someone who could.

She worked diligently to help James get the care and resources he needed, and it paid off. James is happier and healthier now. He no longer lives in fear of his son. It’s still hard, but James is thankful Patricia has been by his side during this difficult time to help him navigate these complicated systems.

In our Giving Tuesday video, Patricia says that her Pisgah Legal colleagues “would go to the ends of the earth” for their clients. With her work with James, Patricia shows that she will also do what it takes to bring her clients to a secure and stable place.

“I couldn’t have done it without Patricia. She stood right by me,” said James.